The medical definition of birth trauma refers to damage of the tissues and organs of a newly delivered child, often as a result of physical pressure or trauma during childbirth. The term also encompasses the long-term consequences, often of a cognitive nature, of damage to the brain or cranium. Birth trauma can cause cranial nerve injury to branches of both the facial and vagus nerves. Cranial nerve and spinal cord injuries result from hyperextension, traction, and overstretching with simultaneous rotation. Approximately 80% of lesions involve the right side and ~ 10% are bilateral. The right side is most commonly affected due to the majority of doctors being right hand dominant. There are three major causes of birth trauma: Delayed birth, Oxygen Deprivation, and Birth-assisting tools. 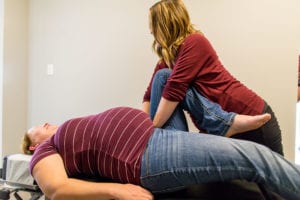 Delayed birth is one of the leading causes of birth injury due to the amount of pressure added to the fetal brain during an extended labor. The human brain was designed to withstand a certain amount of pressure for a certain amount of time. However, labors that last over 18 hours are considered long, difficult labors for both the mother and the baby and at 18 hours, the compression on the brain becomes too much to withstand. This is generally when the baby starts to show signs of fetal distress as the baby’s brain reacts in emergency mode thus elevating the baby’s blood pressure.

Oxygen deprivation is one of the most common reasons for some of the most severe birth injuries and occurs from either external forces (such as a kinked or prolapsed umbilical cord) or from internal forces such as low birth weight or underdeveloped lungs. Almost all brain-related birth injuries are related to oxygen deprivation and the victims can suffer the consequences for any period of time from only a few days to possibly their entire lifetime.

Birth-assisting tools have been commonplace during difficult deliveries for many decades. Although they are certainly beneficial when used appropriately, the percentage of birth injuries associated with these tools, in particular, forceps, has been a cause for concern. A pair of forceps is a birth-assisting tool that is open at the end and placed around the infant’s head to help guide the baby out during the mother’s contractions. The most common reason forceps are used happens when the mother is unable to push the baby out alone during delivery. This can happen for a variety of reasons including maternal exhaustion, a prolonged second stage of delivery, illness or infection, hemorrhage, or when drugs keep the mother from being able to push the baby out successfully. Fetal factors that indicate the use of forceps include a breech delivery or a troublesome reading in the fetal heart tracing. Often these factors (both fetal and maternal) are time-emergent and doctors justify the use of forceps as an emergency dictates. In almost all cases, forceps are not used unless there is a means to perform an emergency cesarean section surgery (C-section) should the use of forceps prove unsuccessful. Forceps deliveries may involve an increased risk of injury to the upper cervical spine and spinal cord. The application and/or misapplication of these and other similar extraction aids can cause upper cervical complications.

Each of these causes for trauma during birth has one alarming thing in common, possible dysfunction of the vagus nerve. Why is the function of the vagus nerve so important? It turns out, what happens in the vagus nerve doesn’t stay in the vagus nerve. The longest of the cranial nerves, the vagus nerve is so named because it “wanders” like a vagabond, sending out fibers from your brainstem to your visceral organs. The vagus nerve is literally the captain of your inner nerve center, the parasympathetic nervous system to be more specific. Like a good captain, it oversees a vast range of crucial functions, communicating nerve impulses to every organ in your body including the heart and lungs. When a baby experiences trauma during the birthing process, the vagus nerve is most commonly affected because it passes through a delicate location in the neck. Therefore the use of forceps, excessive pulling or twisting of the baby as they are birthed can add excessive pulling or torsion to the nerve which can cause lasting problems for the baby. Since the vagus nerve is such a significant piece of the body’s puzzle it is absolutely necessary to make sure that is it able to function properly without any disruption.  Luckily, there is a growing body of research on the positive effects of chiropractic adjustments on sensory processing, motor output, functional performance and sensory-motor integration which are all effects of vagus nerve dysfunction!

To minimize birth trauma for yourself or your baby – make an appointment with us today.

This website uses cookies to improve your experience while you navigate through the website. Out of these, the cookies that are categorized as necessary are stored on your browser as they are essential for the working of basic functionalities of the website. We also use third-party cookies that help us analyze and understand how you use this website. These cookies will be stored in your browser only with your consent. You also have the option to opt-out of these cookies. But opting out of some of these cookies may affect your browsing experience.
Necessary Always Enabled
Necessary cookies are absolutely essential for the website to function properly. This category only includes cookies that ensures basic functionalities and security features of the website. These cookies do not store any personal information.
Non-necessary
Any cookies that may not be particularly necessary for the website to function and is used specifically to collect user personal data via analytics, ads, other embedded contents are termed as non-necessary cookies. It is mandatory to procure user consent prior to running these cookies on your website.
SAVE & ACCEPT